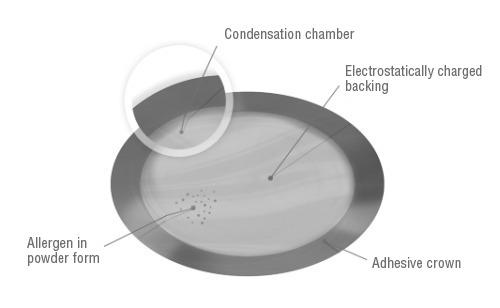 Large numbers of people, especially in the western world, are negatively affected by allergies to different degrees. Sometimes the consequences are mild, sometimes frightening, even fatal (hundreds of people die in the USA every year due to anaphylaxis caused by peanuts). On DBV Technologies.com  you can see what the company’s researchers and scientists have been working on over the past few years – a product that they hope will make a massive difference to many currently living in fear because of an allergy. The Viaskin peanut patch is just one of several adhesive patches developed by the firm. It has also created a cow’s milk and an egg version.

The basic design of the patch, which is displayed below, is simple, although the technology used in its production – including electrosprays – is anything but. The patch is covered in a layer of allergen in powder form, which is able to pass through the skin and into the body’s Langerhans cells by means of a ‘condensation chamber’ which builds up between the patch and the wearer’s skin. This starts off a process known as desensitization or ‘tolerization’.